The Old Rag Trail is a long hike over rough terrain, not for the faint of heart. It is 7.1 miles and is 7.5 hours. If you are in good shape, you can do it significantly faster, but even so, plan to take your time.

Note that I wrote this in 2001. Since that time the hike has gotten a lot more popular and you need tickets. The parking lot has also moved so the hike is a little bit longer.

How to get there: 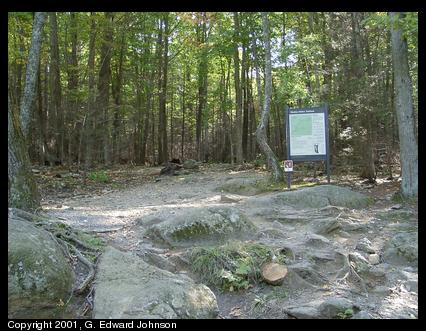 Although Old Rag is located within the park, you can't get there from Skyline Drive, you must leave the park, go off on some side roads then re-enter at the edge of Old Rag. Leave Skyline Drive at Thornton Gap, Mile post 31.5. Turn left on U.S. 201 to U.S. 522 on the far side of Sperryville (about 7 miles). Turn right on 522, follow it for a block then continue on 522 by turning left. Go a bit over half a mile and turn right onto VA 231. Follow it 7.8 miles and turn right on VA 602. Take that road to the end and turn right on VA 601. Stay on that road until the end, it will change numbers a couple of times (601, 707, and 600) You will pass an old mill and fields on the left. There are also signs to show you the way so it isn't as hard as it sounds. The park map shows all these roads so you can follow it as well.

At the end of the road there is a very small parking lot that fills up on weekends. If you can't park there, go back to the larger lot with the information building. It is 0.8 miles from the start of the hike, so it will add 1.6 miles to the round trip. There is a fee for the hike that you can pay at the information center.

In many places the trail is just blue arrows painted onto bare rock so wear sturdy shoes. Also take plenty of water (about a liter a person) and bring a lunch. Since much of the trail is out in the sun, sunscreen may be needed.

Start at the Weakley Hollow Traihead sign, you will follow the Ridge Trail to the summit, then come down the Saddle Trail to Weakley Hollow Fire Road, take a right and follow it back to the parking area. It is only 2.8 miles to the summit, so you could shorten the hike considerably by just turning around, but the hike down the saddle trail isn't nearly as steep, and the fire road is nearly flat. (Update in 2022: I did this hike again and found out the fire road isn't anywhere close to flat, it is a noticably downhill the whole way. Either plate techtonics works much more rapidly than I thought, or, it just feels flat after how steep the rest of the trail is.)

The hike starts innocently enough, going along this trail. It rapidly gets steeper with many switchbacks. You can keep up a pretty good pace on this part and it is a nice hike. 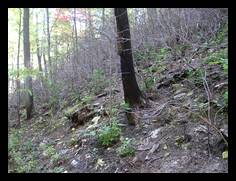 In late October of 2000 this whole area burned in a forest fire. I went on the hike in early October of 2001, almost a full year later and in most places, the fire was but a distant memory. The forest has done an excellent job of recovering. However, in some areas it shows more than others.This dead tree is scorched all around the trunk. Also, there are dead bushes all around. Really it is just the branches that are dead, you can see new shoots coming up at the roots. 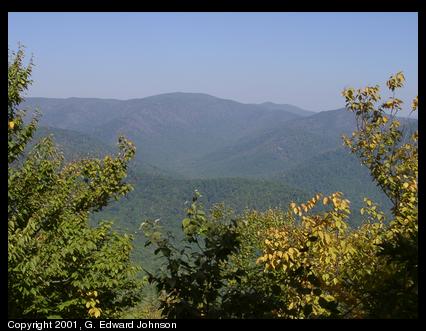 View between the trees. (Large version)

After about three quarters of a mile, the easy part is over. The trail becomes much steeper and rock-strewn. In this area you also get your first views of the Blue Ridge mountains. This continues for about half a mile. 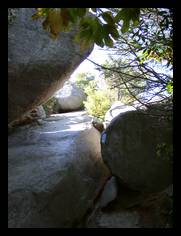 The trail scrambling up boulders
(Medium or Large version)

Now the hard part begins. The trail disappears and you have to follow the blue blazes painted on the bare rock. You will go up, over, and between many rocks. It is slow going as they are quite large rocks and sometimes you have to do a bit of searching for the trail markers.

The rock scramble continues pretty much uninterrupted all the way to the top. In several places the trail passes through narrow canyons less than three feet apart. In the first picture, you have to drop from the top of the canyon (top left of the picture) to the bottom, a distance of about 10 feet, with only a small ledge you can use as a step about half way down. These canyons are natural features where a different type of rock was between two layers of granite and it eroded faster than the surrounding granite. 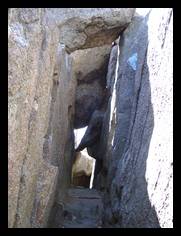 Trail passes through a narrow slot.
(Medium or Large version) 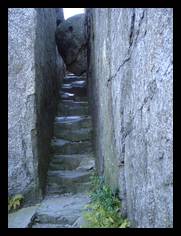 The second slot canyon has a rough floor that looks like it has had stairs cut into it, but this could be the natural erosion. There is also a large boulder lodged between the walls that you have to crawl under. There were numerous occasions where I had to take my day pack off to slide between rocks. 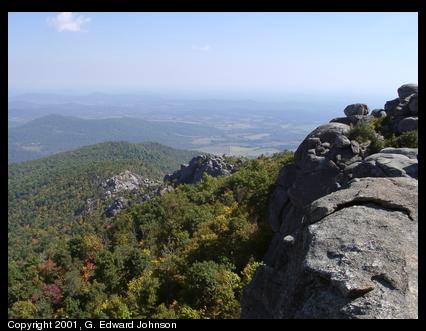 Looking down the peaks. (Large version)

When you get to what seems like the top, you realize it is just the first of three lower peaks, each somewhat higher than the one before it that you have to go up and over before you reach the real summit. This picture is top of the third lower peak looking down at the first and second. The trail runs directly over the top of these three lower peaks.

I found it good to stop for lunch around the first peak. You will really need the energy to get the rest of the way to the top, and once you are there, it is all down hill. 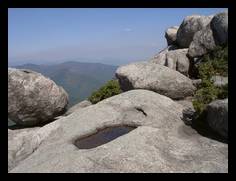 When you reach the top you will see a concrete marker. However, the good views are a hundred yards past it. If you want a full 360 degree view you will have to climb one of the 50 foot boulders at the top. The rocks in this area have many shallow depressions, like the one in the foreground filled with water. These are called 'buzzard baths' though their origin is unknown. 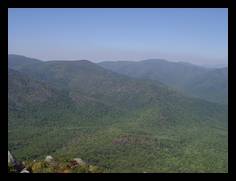 The top, looking into the valley
(Medium or Large version)

From the top you can look west onto the blue ridge mountains and the peaks that host Skyline Drive. The drive runs along the ridge of these mountains but isn't really visible from here. You may be able to see a bit of the road cut at the top left of this picture.

From a slightly different location you can also look east. Take a few minutes here to rest and look around, after all, this was the main point of the hike, so enjoy it.

When you are rested up, it is time to go down the saddle trail. It is hard to miss it, since at the top there are only three ways to go, back the way you came, out to the overlook, or down the saddle trail. The trip down is much easier. Even though the trail is steep, it is a real trail and not a rock scramble 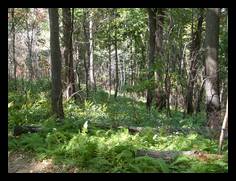 Ferns in the woods
(Medium or Large version)

There are many switchbacks on the trail down so you may not realize how fast you are going down, take a minute to enjoy the scenery. evidence of the fire is all around here too. Most of the trees have scorch marks on the first three to six feet of the uphill side of the trunk, but the fire did not burn the trees themselves. The fire burned right up to the edge of the trail, but usually the uphill side of the trail had a few feet of unburned area. Ferns seemed like one of the first plants to recover, there are many areas where they cover the ground. 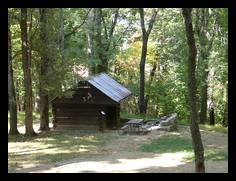 On the way down you pass two shelters, the first is Byrds Nest Shelter No. 1 which you passed near the summit and the second one (pictured) is Old Rag Shelter. There is a spring near by it. The two shelters were built for overnight hikers but now it is for day use only. This shelter is near the end of the saddle trail, right before you get to the fire road. 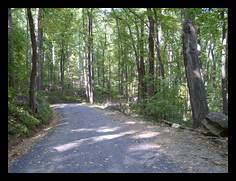 The last two and a half miles of the trail are along Weakley Hollow Road. What a difference. After all that hard climbing, this is practically a superhighway! It is a mostly level gravel road through the trees. In some places you can see traces of old walls and buildings, built by people who lived here before it was a park.

Brokenback Run crosses under a bridge then runs beside the road for the rest of the way back. Listen to the crunch of gravel under your feet and the gurgle of water in the stream. Just before the end of the trail, the stream runs over the road, however, there are two foot bridges you can use to avoid soaking your shoes.