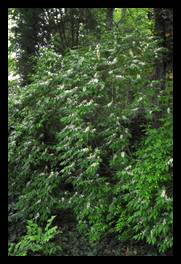 Amur Honeysuckle (Lonicera maackii also called Bush Honeysuckle) is a species of honeysuckle native to Northern and Western China, Japan, Korea, Mongolia, and southeastern Russia. It was imported to other countries and has become naturalized in the eastern United States and New Zealand.

It is a large deciduous shrub that grows up to 20 feet tall, generally towards the edge of the forest.

Amur Honeysuckle propigates naturally through birds spreading the seeds. It is considered an invasive species in 56 states including Connecticut, Massachusetts, and Vermont where it is banned.

The flowers occur in pairs, at the base of a leaf, along the final couple of feet of a branch. The flowers are trumpet shaped with two petals forming a deep well. One petal is long and narrow, the other flairs out and has a scalloped edge. The flowers are white to pale orange, with both colors appearing on the same bush. The stamens are long and reach outside the petals. They are topped with obvious yellow anthers. The pistil reaches the same height as the stamens, with a round, green Stigma on it.

Flowering occurs in May or June, depending on location. Flowers last about a week.

The berries appear in the fall and are are translucent red, a little under one quarter in diameter. They grow singly or in pairs, one from each flower. Birds eat the berries and spread the seeds. 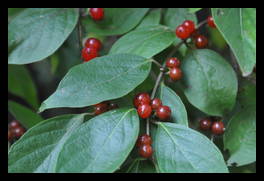 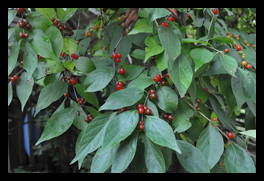 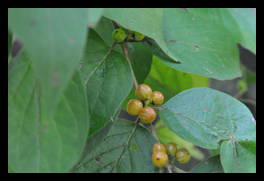 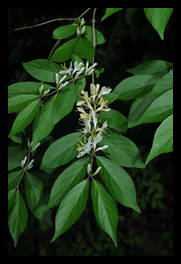 The leaves of the honeysuckle grow in pairs, opposite each other along the length of the branches. They are an elogated oval, coming to a sharp point at the end. The edge of the leave is smooth, if you look closely you can see very fine hairs on the edges of the leaves and on the smaller twigs. There is one center vein that runs the length of the leafe and many prominent veins that come off of it, roughly parallel to each other. These veins have even smaller veins that form a network. The leaves are 2 to 3.5 inches long and 1 to 3 inches wide. They are a uniform green color. 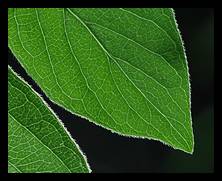 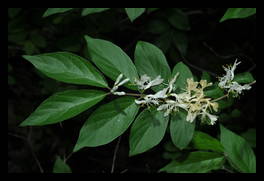 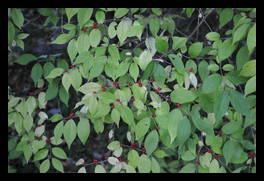 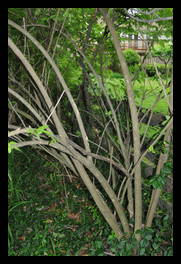 Multiple slender trunks come out of the ground. the trunks are stiff, but flexible, about 1 to 4 inches in diameter. Branches come off the trunks at varied intervals. The branches droop as they come foreward. The bark is thin with vertical lines breaking through it. 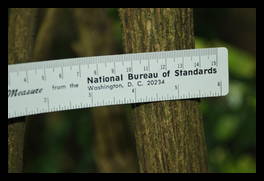